Laguna Hills enjoys a large amount of open space; however, rural open space areas are also the habitats for a number of wild animals, including coyotes. It is believed that many coyotes have become more daring as they are accustomed to living near residential areas. Coyotes often hunt between sunset and sunrise but can be seen at all hours of the day and night. Small pets can be viewed as an easy meal to a coyote. While they don't usually attack humans, coyotes can become aggressive if they are concerned. Parents should warn their children to avoid strange animals that are either domestic or non-domestic.

If you see coyotes around your property or neighborhood contact Mission Viejo Animal Services at 949-470-3045 and provide your name, address, and phone number along with information of where the coyote was last seen.

If you have an encounter with a coyote, i.e. enters your backyard and won't leave, attacks pets or if they appear to be acting strangely and in a threatening manner, contact Mission Viejo Animal Services at 949-470-3045.

If a person is attacked by a coyote call 911 immediately.

Here are some simple tips to prevent coyotes from visiting your home or neighborhood: 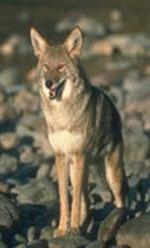